The late Roger Aylett started his own business – Aylett Nurseries Ltd on the same 7 ½ acres of land at the age of twenty-one. Roger trained at Oaklands College which at that time was solely for the study of Agriculture and Horticulture and was located on the Hatfield Road, St Albans, later on in the 80’s he became a governor of Oaklands and always took a keen interest in the training of young aspiring horticulturists. 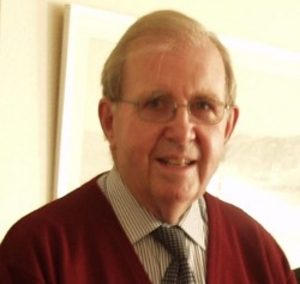 Initially, Roger grew glasshouse crops on the nursery but soon developed his childhood interest – Dahlias. Very soon stunning dahlia exhibits were wooing the public around the country and plants were dispatched to all corners of Britain, Aylett Nurseries won many top awards for these displays including 36 consecutive Gold Medals between 1961 and 1999 at the Royal Horticultural Society shows. At the Great Autumn Show of 1977 the Nursery was awarded the Williams Memorial Medal, this is presented for the best exhibit of plants and/or flowers of a single genus staged at one of the Society shows during the course of a year. This great achievement was repeated again in 1994.

For over thirty years Roger was a valued member of the R.H.S Shows and Dahlia Committees – he was also regularly seen assessing the dahlia trials at Wisley and the National Dahlia Society awarded him their Silver Medal in 1999. The previous year he was overjoyed to receive recognition from the Royal Horticultural Society with the award of the Veitch Memorial Medal for outstanding contributions to the science and practice of horticulture. This moment he later described as representing the pinnacle of his career.

Best described as a “pioneer”, Roger developed the family business into a very successful independent garden centre. In 2005, he published his autobiography 50 Golden Gardening Years. In 2010 Aylett Nurseries received the accolade of Gardening Which “Best Buy” – rated the third best independent garden centre in the UK. As Managing Director, Roger was justly proud of these achievements.

He was very involved within the local community. Roger was a true gentleman – quiet, unassuming, kind and generous. His interests were his family, to whom he was devoted – and Aylett Nurseries Ltd.

And what of the future ?

“Well the nursery is in the safe hands of the family, but I have no crystal ball ! If I’d had one, of course, life would have been much less of a challenge and far less enjoyable too’ . A quote taken from the end of “50 Golden Gardening Years”.