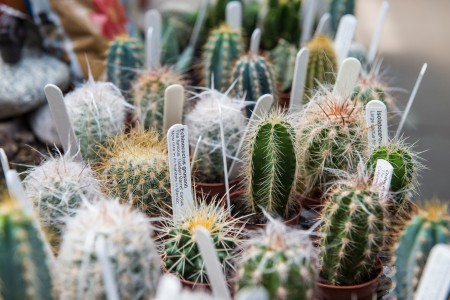 Cacti and Succulents for the windowsill

Many of us, and perhaps especially children, are attracted by these exotic plants. The common linking characteristic of these two types of plants is their ability to store water in the leaves and stems enabling them to survive in dry habitats. However although they do not like standing in water, contrary to expectation between April and September they can be watered freely just allow them to dry out slightly between each watering.

The majority of cacti and succulents grow in the desert with low moisture, dry air, bright sunshine, good drainage and high temperatures, making them ideal specimens to grow on a windowsill. Many are miniature so they are ideal for grouping together in a saucer or windowsill tray as a collection of shapes and sizes. These plants are generally content in a bright position but generally don’t enjoy being baked all day. They are more likely to produce flowers if they are fairly cool in the winter, being happy with a temperature of 5 degrees centigrade. 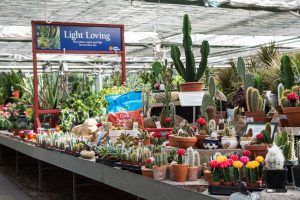 They enjoy plenty of water from spring till autumn. During winter many are happy with four months of drought. Others can become desiccated in the dry atmosphere of the house and may benefit from an occasional light misting or a very light watering. It is generally easy to buy specialist compost and to periodically repot them into slightly larger containers. With spiky plants try gently lifting them in a wad of newspaper. Note that the paddle-like leaves of Prickly-pears (Opuntia forms) can shed tiny irritating hairs – far more uncomfortable than simply being stabbed by a spine!

The top of the soil should be covered in a layer of grit or small pebbles. In the growing season, April until September, feed once a month with a specialist cactus feed or liquid tomato feed. If treated correctly many cacti will flower, albeit briefly when the clear colours of their party dresses are a delightful bonus.

A few cacti that have regular shapes and, in some cases, stunning flowers:

Mammilaria bombycina. This makes a spreading colony of hairy silvered globes that carry both long and short spikes. There are around five hundred different species of generally rounded forms which often flower quite regularly.

Echinopsis come in both long and round forms, some of which have stunning blooms.

Gymnocalycium paraguayensis charm with their characterful formation and often curious spines. These contrast well with the neat lines of many Mammilaria.

Haworthia attentuata with small spiky-fans having zebra stripes. There are other haworthias with curious foliage forms that delight the eye.

The delightful money-tree: Crassula argentea. This can become a substantial plant with round fleshy leaves and small starry flowers in winter. This is said to attract money to the home and can be an ever-growing feature for many years.

Many will know the Christmas or orchid cactus with cascading foliage that is beautiful in a basket. These delight with their profusely borne flowers.

And for something different:

Lithops forms, popularly called ‘Living Stones’. These disappear completely for part of the year when the ‘stones’ desiccate. An example being Lithops aucampiae with exquisite yellow daisy flowers in late summer and autumn.

Finally, for the adventurous, the amazing Pachypodium such as Pachypodium lamerei with silvery trunks and hat-like cap of leaves. This is called the Madagascar bottle-tree and is a great challenge if you have space and tolerant partners.