When you think of the desert an image of the cactus is sure to quickly follow, but these popular plants have been a household favourite for many years and have grown in popularity in recent times.

Cacti fit in perfectly with the contemporary, minimalist, style home that we have become accustomed to and they are also perfect for the modern, busy, fast paced lifestyle. These plants require minimum maintenance for them to thrive and make ideal houseplants as they enjoy the dry atmosphere of our centrally heated homes.

This unusual and often striking group of plants is extremely vast and diverse from small and intricate to the architectural. With their wide ranging attractive forms, textures and colours there is a cactus to suit everyone!

Cactus have the ability to store water in the leaves or stems enabling them to survive in arid habitats. Many live in extremely dry environments, even being found in the Atacama Desert, one of the driest places on earth. Cacti show many adaptations to conserve water. Almost all cacti are succulents, meaning they have thickened, fleshy parts adapted to store water. Unlike many other succulents, the stem is the only part of most cacti where this vital process takes place. Most species of cacti have lost true leaves, retaining only spines, which are highly modified leaves. As well as defending against herbivores, the spines help prevent water loss by reducing air flow close to the cactus and providing some shade. Without leaves the cacti’s enlarged stems carry out photosynthesis. Cactus spines are produced from specialised structures called areoles, a kind of highly reduced branch. Areoles are an identifying feature of cacti. As well as spines, areoles give rise to flowers, which are usually tubular and multi-petaled. Many cacti have short growing seasons and long dormancies, and are able to react quickly to any rainfall, helped by an extensive but relatively shallow root system that quickly absorbs any water reaching the ground surface. Cactus stems are often ribbed or fluted, which allows them to expand and contract easily for quick water absorption after rain, followed by long droughts.

• Place your Cacti in a well-lit or sunny position
• Keep well-watered throughout the summer, but allow compost to dry between watering.
• Do not allow to sit in water – it’s better to under water than over water!
• In winter, they should be kept cool (around 10 ⁰C) and little or no water given.

Outdoor Plant of the Month 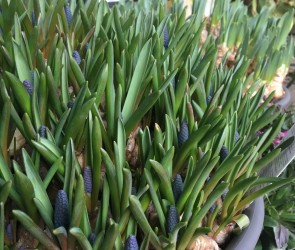